The thought of fishing the #1 bass lake in the United States was really exciting! I couldn’t wait!

Scott Hootman invited all of us up to his lake house in Door County. His lake house is located on the #1 bass water in the United States – Sturgeon Bay!   It’s a lake that has a huge smallmouth bass population.   Smallies up to 8.43 pounds have been caught in tournaments.   No doubt fish that large and probably larger have been caught outside of tournament action!

I arrived Thursday night around 8:30.   Scott and Nick Johnson arrived around 11:30 later that evening. It was great to get together again and we spend a few hours catching up and enjoying an adult beverage or two.

It was pretty tough getting up the next morning around 6:30 after going to bed around 2:00 am but the thought of large smallies finning in the water just yards away was too much to resist. So we had some coffee and a little breakfast and then drove over to the marina to get Scott’s boat.

We headed out to fish. We caught some fish but it was pretty windy and the fishing was actually pretty tough. But we caught some. Here’s a nice fish that Nick brought to the boat… 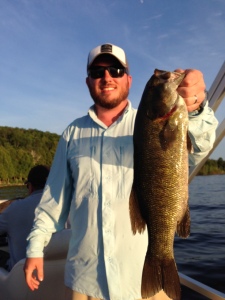 We came back to the lake house and fixed some lamb sliders on the grill. Really tasty! Scott and Nick also started working on our Saturday night meal….what were we having? Check out the picture below. They started smoking a huge brisket! 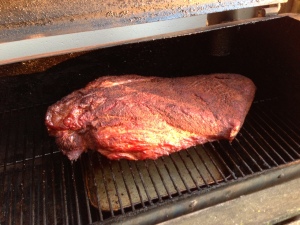 After getting the brisket started on the smoker we headed back out to fish some more.

Jamie arrived around 3:30 on Friday afternoon. He made a cool entrance/arrival for the weekend by surprising us and meeting us out on the water. It was good to see him.   And he brought some really great pulled pork for dinner!

After dinner we started a fire outside on the patio and visited for a while. It was a great view of the bay! We tried to wait up for Jon but just couldn’t do it….at least Scott and Jamie and I couldn’t do it…. Jon arrived after midnight.

Saturday morning we had coffee and breakfast and then headed back out to fish.   It was tough fishing again – it was windy and the fish were difficult to find.   So in the middle of the afternoon, (after we lost our fishing mojo) we decided to head back for dinner. It was time to eat the brisket that had been cooking for probably 15 hours.   Check it out – it was a beautiful piece of meat – you can see the damage we inflicted on that work of art! 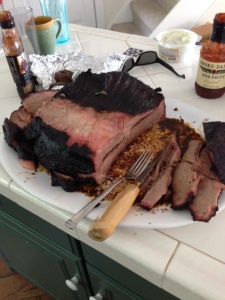 Saturday evening we caught fish, but they were uncharacteristically difficult to catch.   Again, we had a nice fire and enjoyed the evening.

Sunday was a better fishing day.   We found that 12’ was the magic depth…and anywhere we could find weeds at that depth.   Here are a few pictures of fish caught on the pontoon boat…. 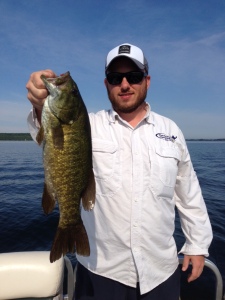 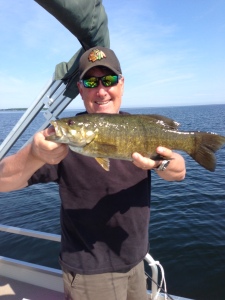 It was a great weekend. Can’t wait till we get together again!

One thought on “Sturgeon Bay!”