It’s November and the lure of whitetail hunting is in the air!

It’s a beautiful time of year – especially in southern Illinois.   The trees have all turned. The nights are crisp – yet the days are still warm, and often sunny.

We have a collection of three family farms in southern Illinois.   I call them farms, but there’s no farming being done – the family uses them for hunting, fishing, camping, and fellowship. The farms are pretty much next to each other. There are lots of woods and some open areas some of which are part of the government CRP program.   This program provides for a small subsidy to replace farming income.   It works well for us as all of us enjoy hunting and fishing and being outdoors.

These three farms have great habitat for wildlife, including and especially for whitetail deer. This past weekend my oldest son and I headed south to the farms to deer hunt and to be with extended family.   And what a great weekend it was!

My cousins Bruce and Bill are great deer hunters.   They know the part of the farms that they hunt on very well.   Their success hunting this year was really productive.   Both had already harvested does this year and were now looking for a little larger deer – especially bucks.

Bruce struck first on Thursday night. He shot a great buck.   It was a solid 8 pointer with a field dressed weight of 200 pounds.   Beautiful deer! Here are a few pictures of Bruce’s harvest: 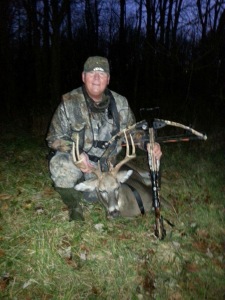 Bill harvested a buck on Sunday morning. It was a 4 pointer weighing a solid 140 pounds field dressed. It was a great looking deer.   I’m pretty sure that I videoed the buck from a tree stand about three quarters of a mile away from Bill’s stand.

Here’s a couple of pictures of Bill’s nice deer:

Andy and I spent our weekend over at the lake and shelter house of one of my cousin’s son.  His name is Scott Deutsch and he’s a great deer hunter.  His two sons, Kyle and Zach are also great hunters.   They as well as Bruce and Bill have been a wonderful help for Andy as he learns to bow hunt.   Scott, Kyle, and Zach didn’t harvest a deer this past weekend only because they were looking for bucks with larger racks.   They passed up several shots on deer that they wanted to leave to grow the herd.

Andy has just started bow hunting for deer – in fact, at the time of this year’s hunting, he had only owned his bow about 10 days.   But he had been practicing a lot and seems to take to shooting a compound bow.

Andy got a couple of shots over the weekend, shooting low on one doe and high on another doe.   He was VERY close on both shots but didn’t draw blood.

On Saturday evening, Andy rattled in a nice four point buck – he drew him in to about 15 yards, but the buck was on the east side of his stand and when he tried to rotate his body so that he could draw back and take a shot, he realized that the tether of his safety harness wasn’t positioned in a way that he could rotate to take the shot! Arghhhhh!   Every outing is an opportunity to learn more about deer hunting and he’s soaking it up like a sponge!

He’s very excited about deer hunting and realizes that hunting isn’t about the kill….it’s about everything around the kill, with the actual kill being a small part of the event. It’s been great sharing this new activity with him and I hope there are many more hunts together in front of us! 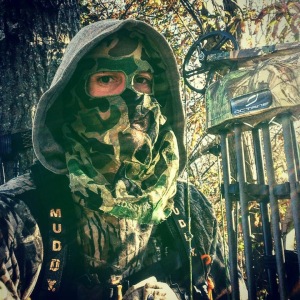