Snowmobiling got off to a slow start this year. The trails typically open mid-December….but not this year!

Lesa and I usually enjoy having company up to snowmobile starting New Year’s Eve.   But this year, riding got off to a slow start.   The trails didn’t open until almost mid-January and lakes weren’t marked for safe riding until almost the third week of January.   So we started off the first three weekends that we usually ride with communications to people that their trips up north had to be canceled/rescheduled. Bummer!

I was especially excited to ride this year because I sold a couple of sleds and bought a couple of more. Both the sleds I added were nice upgrades to the stable.   Both are Arctic Cats and both have proven to be good buys (knock, knock). Here’s a couple of pics of the new additions….

My first riding trip was the weekend of the 16th of January. I took delivery of my new sled and rode about 25 miles. It didn’t take me long to decide that the snow was just too thin. There was just too much of a feel that I was damaging the sled so I took it back home and put it away. Took a short ride later that weekend to make sure the F1100 was running ok – and it was running fine.

On that Saturday I met Steve Osterling for a steak at MacGregor’s Blink Bonnie.  Steve and I worked together back in the 80’s and 90’s. It was good to catch up with him. He was anxious to ride this year as well. We keep trying to figure out how to ride together but it’s a little difficult because our lake houses are on opposite sides of Minocqua.   I’m sure we’ll figure it out eventually.

After dinner we headed over to Sister’s for a quick night cap and then headed home. I have to give Steve a “tip of the hat” from that evening….Steve turned me on to the world of Stormy Kromers! Stormy Kromers are hats that are worn in the northwoods (and other places I’m sure, especially in the Upper Peninsula). They’re really comfortable and look great. They are basically “collector” hats. I bought one the following week and so while I’m now a collector, I’m a “newbie” because I only have one. True Stormy Kromer collectors typically have several Kromers. Can’t wait to buy a couple of more!

There was a lot of snow dancing going on during the following week and the snow gods blessed us with a few inches of snow and some cold down in the -20 degree range and so the lakes were marked that we needed to cross to ride the trails. And while the trails were a long way from pristine, there was enough to ride. Finally!

Riding with the Oklahoma Gang!

On Thursday the 21st the Oklahoma group rolled into the Minocqua area. Ralph, Julie, Curtis, and Brenda landed at CWA and then drove to St. Germain to get their rental sleds.   I rode to Sister’s and Lesa and I and the four of them all convened there. After a short visit there, we rode back to the house and relaxed.

It was exciting to head out Friday morning – as you can see we had a bunch of sleds warming up in the garage. It was great having a caravan of six sleds moving through the winding, beautiful trails of the northwoods.

Here’s a couple of trail pictures….. 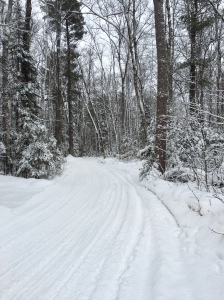 We did our usual first day ride heading up to Sayner, Star Lake, St. Germain, Arbor Vitae, and then back to the house. We hit the fish fry at Four Seasons in Arbor Vitae and as usual it was good. It was a nice night ride home through the woods.

Have to have some chili! 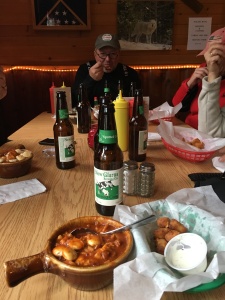 Here are various pictures while we rested at Stillwaters….

Saturday morning Ralph, Curtis and I headed out to ride. Julie, Brenda, and Lesa headed out to shop at some of the local shopping places.   We rode to some places that Ralph and Curtis hadn’t been to before. We rode to Pope’s Gresham Lodge first. It was a nice ride with a few parts of the trail being really great – they were well covered with snow and were wide trails outside of the woods so we could ride at an enjoyable, but careful speed.

After spending some time at Popes, we rode further north into Manitowish Waters and landed at the Howlin’ Dog Saloon. This is a really old, dive kind of place. The girls met us there and we had a lot of fun.

After leaving Howlin’ Dog, we headed back down to St. Germain to meet them at Sister’s. It was a long ride as we went further north and east through Boulder Junction and then further east on a trail north of Star Lake. It took us two hours to get down to St. Germain – some of the trails getting there were really rough and we took a beating. But we were rewarded with an absolutely beautiful sunset. 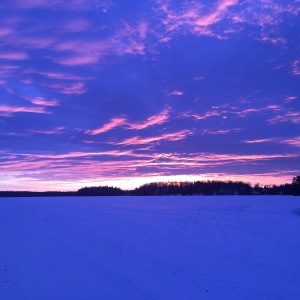 While the girls were out shopping they bought everyone Stormy Kromers – here’s a picture in Sister’s with all of us wearing our Kromers.   Lots of fun! 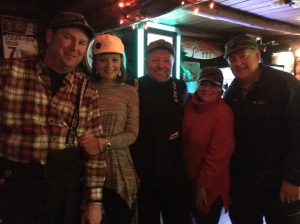 After Sister’s we slipped into MacGregor’s Blink Bonnie for steaks. They were so good! After dinner we rode home. I think we had a decent ride that day putting on somewhere around 130 miles.   Sleep came easy that night after all day on the trails.

Sunday morning, we all rode to WolfPack in St. Germain for breakfast. It’s an annual trip and was tasty as always. After breakfast we rode down to Lake Tomahawk for a bite to eat and then headed back towards the house.

At the “T” on 70, we stopped and said our goodbyes.  Lesa and I headed back to the cottage and Ralph, Julie, Curtis, and Brenda headed the other direction for some more riding.   Lesa and I were headed back to Glen Ellyn that evening and the Oklahoma gang was going to spend one more night and would close up the cottage. 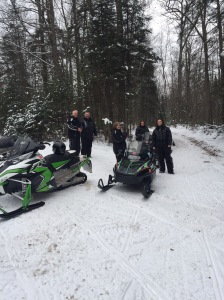 Curtis took some great pictures of signs along the trails – it’s a good perspective on directional opportunities and just how far reaching the trails are….. Here are a few of them…. 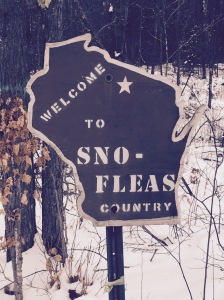 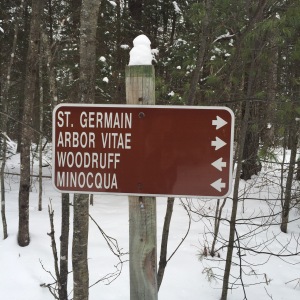 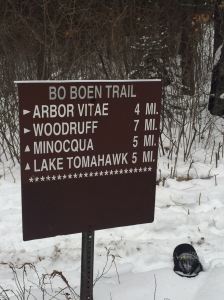 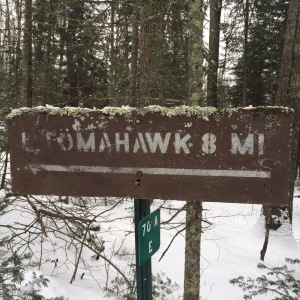 On the 29th of January, Mark Brelje came up to ride. He arrived about 2:45 and by 3:30 we were on the sleds heading out for a ride.   We didn’t ride very far. We rode to St. Germain and Arbor Vitae and then came back home and had a fire and visited. It was really nice to catch up with Mark.

On Saturday we rode the usual route to Sayner, Star Lake and St. Germain. 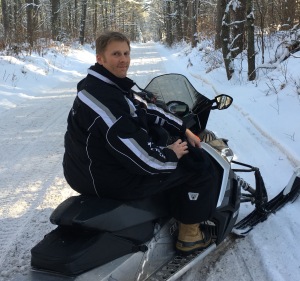 We gave up early on Saturday though as the temperature hit 40 degrees and with all the traffic the trails quickly deteriorated. After getting back home we got in the car and drove to Blink Bonnie’s for a steak. We met Steve Osterling and his friend Greg Kramer there and a nice dinner. Of course, Steve and I had to have a picture of both of us wearing our Kromers! 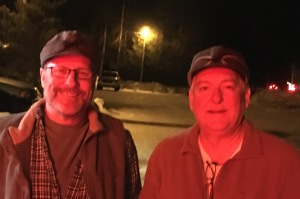 Mark had caught some kind of bug and was feeling under the weather so we headed back home and called it a night. Was a great opportunity to reconnect with Mark and hope to have him up north again!