Fishing is slowly winding down…..but that means fall hunting is on the way!

Towards the end of July, Scott Hootman and his wife Liz came to the cottage for a weekend.  We had a great time visiting and of course Hooter and I spent time fishing.  Here are some pics of good fish Hooter caught.  Was a fun time! 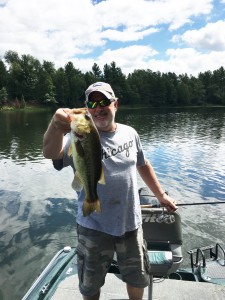 At the end of August our Hodag Bassmaster’s Fishing Club held its last tournament on Big Arbor Vitae Lake.   It was a “family fun” team tournament.   Andy and Sarah fished with me.   It was Andy and Sarah’s first tournament – they did well and seemed to really enjoy it.  We ended up taking third place.   After the tournament ended, the whole club had a picnic.   We had burgers, dogs, and all kinds of sides and deserts.   It was a great way to end the year’s club tournaments and everyone had a great time.  Here’s a few pics of the weigh in and the picnic afterwards! 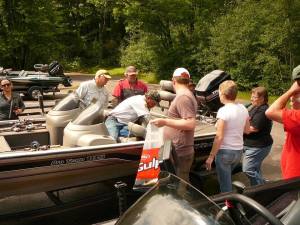 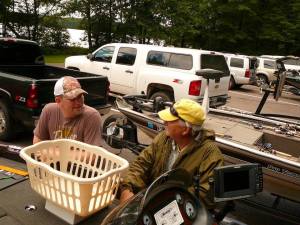 Over Labor Day we had our family Labor Day campout.   It was pretty much a perfect camping weekend with the weather being absolutely perfect.  We caught fish, ate great meals, and visited around the campfire at night.   Those times always go too quickly and then take too much time to come back around.

In early September I joined Scott Hootman to goose hunt in the Sturgeon Bay area and then we headed over to Minocqua to fish for the weekend.

We fished a little bit on Sturgeon Bay, but the focus was goose hunting.   And the goose hunting was a little slow but we were still able to harvest 4 geese and had a ton of fun.   It’s always enjoyable to goose hunt and fish with Hooter.   And this year we were joined by Craig Hurley.   Craig is a great guy and I enjoyed getting to meet and know him.  Hope to have the opportunity to hunt/fish with him again in the future.

Here’s some goose hunting pics including blinds in the fields and blinds at Scott’s boat house. 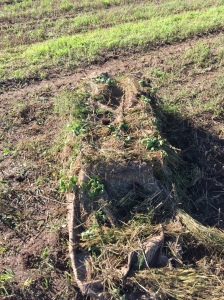 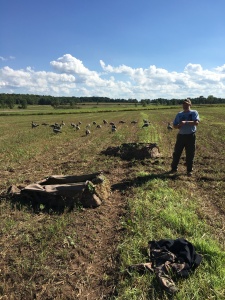 After goose hunting for a couple of days, Craig headed south to the Chicago area and Hooter and I headed over to Minocqua to meet his brother-in-law Jamie to fish for three days.

We fished some area lakes and really didn’t do very well the first couple of lakes.   Then our catch improved and we started boating some nice fish.

Later on in September Lesa and I spent a weekend with Jim and Gail Cleary at their   beautiful lake house on Apple Canyon Lake.   The four of us spent a couple of evenings out on the water enjoying wonderful evening cruises in their boat.

Jim and I fished both Saturday and Sunday.   On Saturday we did well catching somewhere between 30 and 40 largemouth bass.  I wish I would have taken some pictures of our catch but just didn’t think about it.

On Sunday, we fished again, but the bass were really tight lipped and we were skunked.   But it was still fun to be out there trying to catch them.   It was a great weekend and fun to catch up with Jim and Gail.

In late September Mike Anderson and I spent a few days fishing the Minocqua area.  We really had to fish hard, but we caught some nice fish.  Here’s a couple of nice ones.

Finally, Mike and I fished an open team tournament on Lake Metonga.   We hadn’t fished the lake much but thought we had a decent strategy on how to catch some fish.   Well we caught some small ones and then finally towards the end of the tournament we figured out what we needed to do catch more.    So we ended up taking two fish to the scales at the end of the tournament.   Here’s a picture of a nice 4.29 lb’er.

This is probably the last blog posting that includes fishing.  Hunting though is just around the corner, so please check back in a month or so!