Arrived in southern Illinois on Tuesday evening.  It was good to connect again with two of my cousins – Bill and Bruce Bennett.  The weather wasn’t conducive to being outside so we sat inside their cabin and visited.  As the evening crept on there were rumblings in the southwest and streaks of lightning flashed across the sky.   The coyotes in the area must have known a weather change was on the way because they were really active and the pack was pretty large –  there was a lot of yipping and howling going on.

We hit the sack early knowing we were going to build a number of blinds in the morning.

The storm really hit with a vengeance around midnight and kept up for several hours.   Lots of lightning, thunder, and strong winds.   The cabin has a steel roof so the rain and a little bit of hail made a lot of noise on the roof.  It felt good to be in a dry place.

After a big breakfast Bruce and I jumped on our ATV’s and headed down to the river bottoms.  It was definitely sloppy as we moved deeper into the river basin.

We built our first ground blind on the side of a bluff that faces an open field.  In the past we’ve shot turkeys from the side of this bluff and so we always build a blind here.   And if the river is out in a couple of weeks when the season starts, this will be a prime area for seeing turkeys that have been forced out of the river bottoms by flood water.  The picture below is a picture of Bruce at the bluff:

After finishing the first blind we headed further west into the river bottoms.  I picked another spot on the south edge of the same field.  I found an area that I can back up to some trees to break up my silhouette yet give me a great open area to shoot.  It will be a perfect place to set up decoys to attract/call in tom turkeys as they begin to move into open fields in the morning.  I stuck a couple of reflective tacks into two trees at the spot so I can find it when it’s early morning and still dark.  It’s amazing how those tacks show up with even a small flashlight!

We moved even further into the bottoms where Bruce and I set up my last ground blind.  It’s a an area that I’ve hunted in several years and three turkeys have met their maker here – two by my good friend and hunting partner Scott Hootman and one by yours truly.   So this place really feels like home.  It doesn’t take Bruce and me long to build some sides to the blind and pile it with weeds, leaves, and natural river debris.   It’s gonna feel good to settle in to that blind in a couple of weeks to call in that bearded tom turkey.  Nothing is much more exciting than seeing that prehistoric looking bird coming to the call!   Here’s a pic of my third blind: 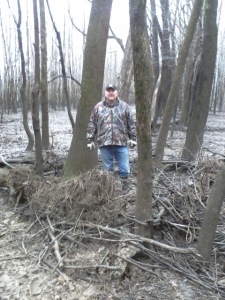 So now it’s time to head back to our ATV’s and then the cabin.   We head back east and out of the river bottoms.   As we’re moving through the woods I caught a glimpse of something that looked like a set of antlers.   I mentioned it to Bruce and moved up closer to take a look.   And sure enough it was a really nice set of antlers….still attached to the deer’s body.   Not sure how it had died but it had been picked clean by coyotes – didn’t appear that it had been dead that long.    Here’s a picture of the head and antlers – what a gorgeous deer.   I would suspect that it was an impressive looking animal as it moved through the woods: 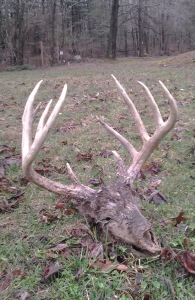 We loaded up our ATV’s and headed back to the cabin.  We strung up the head to let nature complete it’s natural course of cleaning the skull of skin and flesh.  When that process is complete I think a European mount is headed our way.

When we got back to the cabin, we relaxed, visited with my Uncle Bill, had a cigar, and discussed both the day at hand and the soon to come start of our turkey hunting season.   What a great day!