Jim, LaVonna, Gary, and Jen came to the Minocqua area to visit. They’ve not been here before so we were really looking forward to showing them the area and enjoying a good visit.

END_OF_DOCUMENT_TOKEN_TO_BE_REPLACED

Mark and Sandy Lawinger arrived Friday night about 9:00 pm. Mark had two items on his bucket list…would we be able to mark those items off his list?

END_OF_DOCUMENT_TOKEN_TO_BE_REPLACED

Sunday was bright and beautiful, but pretty cool.   The wind was blowing from the north.   We had a good breakfast and headed out to a local lake.   There were a number of bedding bass on the lake and we caught a bunch. 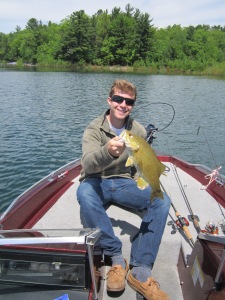 After a few hours of fishing we drove into Lake Tomahawk for lunch.   We had a nice snack and a Bloody Mary and then headed back to the cottage.

We went out on the pontoon boat, caught some bass and then came back for grilled burgers. We ate the burgers down by the fire.   It made for a great dinner! Sleep came pretty easy Sunday night.

Jackson caught his first northern pike that first night out on the pontoon boat!  It was a great fish!

Monday morning started with biscuits and gravy.   We stopped by Plowman’s to get a marine battery and then headed north to fish Clear Lake, Manitowish Lake and Little Star. We got a quick start on Clear with four quick smallies.   We decided to move to the western part of Lake Manitowish and Little Star. Fishing was tough but Gene hooked a good one.   After a while we decided to give it up and headed to Sayner for a Bloody. 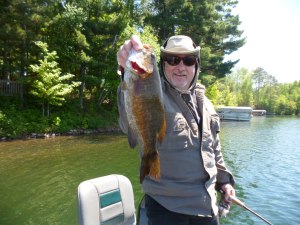 We stopped on the way home to pick up a second battery at Plowman’s as the second trolling motor battery seemed to be bad. Once we got home we jumped on the pontoon boat to catch some largemouth.   Then we came back to the cottage and Fuzzy and Jackson grilled some chicken breasts. We enjoyed them down by the fire again.

Tuesday dawned warmer. We got out of the gate much sooner after pancakes and sausage.   We pulled the boats to Little Saint Germain Lake and did really well catching a lot of nice largemouth and a few northern pike. We had a bite to eat at Sister’s Saloon and the dropped the boats into Plum Lake.   While Plum was slow, we still brought some 3 ½ pound smallies to the boat as well as a nice muskie.

Wednesday we pulled the boats to Shish and Gunlock – we caught lots of largemouth and a few smallies. It was really windy! We stopped at Black Bear Bar for lunch. And then we dropped into Clear Lake and caught some nice smallies.

There was a lot of cool wildlife to see including loons and eagles.

And of course some nice fish! 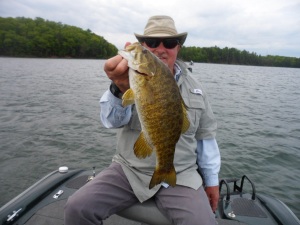 Once we got back to the cottage we had cigars and evening cocktails and watched bass slurping dragonflies on the water.   Really relaxing. Dinner that night was Polish sausages on the grill. And then we watched the Blackhawks defeat the Tampa Bay Lightning – what a great game!

Thursday was rainy! We waited a while at the cottage before heading out to fish. The rain had pretty well stopped except for a fine mist. We caught several nice fish. 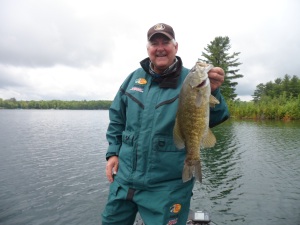 We stopped for ice cream at Hoggie Doggie then came back to the cottage and relaxed for a while.   Early in the evening we headed out on the pontoon boat to catch some more largemouth. We laughed so much that night – was truly a great evening.

We had each bought our own entree at the Lake Tomahawk Meat Market. We each cooked our own, and along with a baked potato and salad, we had a great meal! 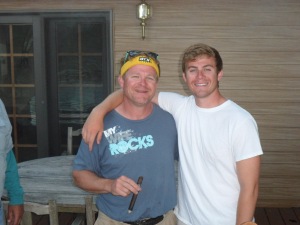 Friday morning everyone left between 6:30 and 7:30 am.   It was a great week of fishing with lots of great memories!

Yep, yesterday was a beautiful day! I was up by 4:30 to head for our club tournament.

END_OF_DOCUMENT_TOKEN_TO_BE_REPLACED

My brother Phil arrived about 2:30 on Thursday. After quickly unloading his car we visited a while and then headed to Sister’s for an adult beverage.

END_OF_DOCUMENT_TOKEN_TO_BE_REPLACED

This is such an exciting time of the year! I’ve got a turkey in the freezer and now I’ve turned my attention to another passion of my life – bass fishing!

END_OF_DOCUMENT_TOKEN_TO_BE_REPLACED

The three big toms came slowly in to my call. I turned on my RedDot scope and clicked my safety off.   A few more yards and one of those beasts would be headed to my smoker.

END_OF_DOCUMENT_TOKEN_TO_BE_REPLACED

On Friday, April 10th I loaded up the jeep and headed to southern Illinois.  After a wait of a year it was finally time to head south to hunt for turkeys.  I was sure there was an ol’ tom waiting for me!

END_OF_DOCUMENT_TOKEN_TO_BE_REPLACED

Added a few more pictures from the year’s snowmobiling trips.  Click on the Snowmobile Tab on the main menu!  Thanks for making the trip Gary!